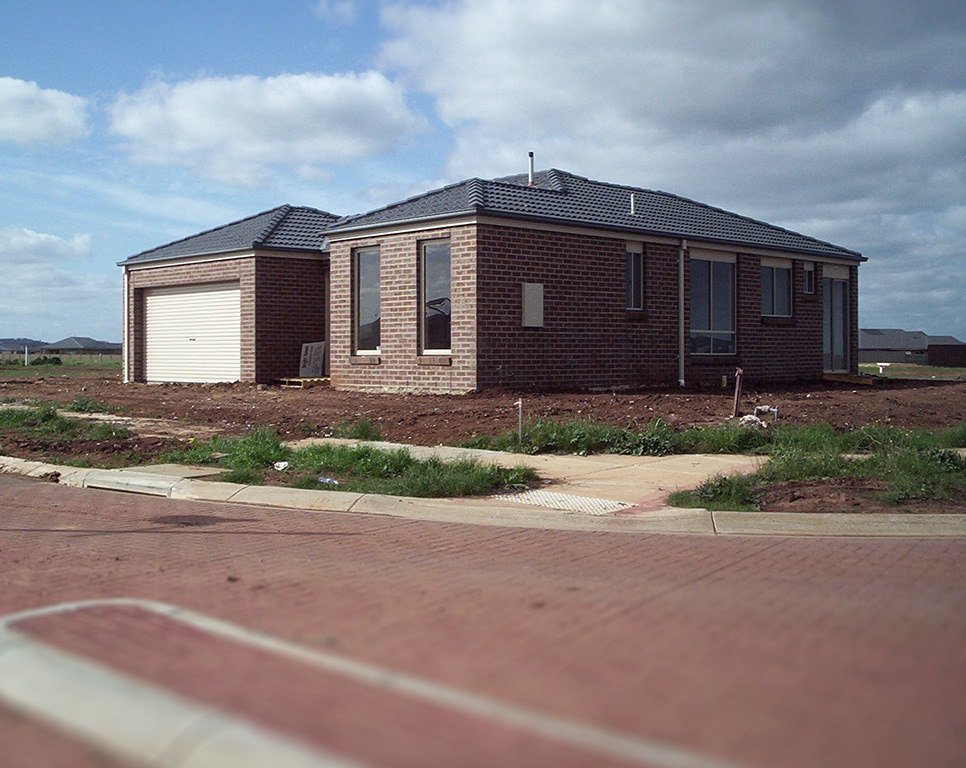 Project: display lives
Year the project commenced: 2003
Year it became impossible: 2008
Visiting a housing display village is a bizarre experience. Usually bordered by weed-infested cow paddocks, often with the traffic of a freeway streaming past, surrounded by streets and footpaths that go nowhere, edged by ramshackle construction sites, you enter a house that is ‘the perfect home’. There is a (fake) bowl of fruit on the bench, a (fake) bread stick that has (presumably) just come out of the oven, there is a note on the fridge ‘ Honey, home at six’; in the rumpus room a DVD of Shrek is playing. The lights are on but there’s nobody home.
Each house—each with its own individual architecture and ‘lifestyle experience’—is a virtual home, a fiction, set-up and interior-designed as if to say: This could be you—eating the fresh bread, reading the note, watching the kids watching Shrek. And, if you stayed long enough in a display home (say a whole afternoon, or even a night), you might actually start thinking that this was real. But as soon as you step out the front door again, you are reminded that it’s not real, it’s all a set-up. The reality is that you’re standing on a half-built street in the middle of nowhere.
Display Lives, was to be set in a housing display village on the suburban fringe, and would have been the fourth in ICE’s very successful program of major site-specific works, further advancing the stated aim of the company to ‘create confronting, entertaining, site-specific theatre, using professional artists from across a range of disciplines’.
Envisaged as a site-specific promenade performance exploring the idea of ‘home’ and ‘community’ in the local and global context. The performance would take place in an already-existing housing display village (in the street, and in the houses themselves) in an outer suburb of Melbourne. The audience would travel to the village from the CBD by bus, watch various performances on a rotation basis, then return by bus to the CBD again. Both the bus trips and the display village setting will be used to create the performance.
Artist:the institute of complex entertainment
Collaborators: Susie Dee- director
Wayne Macauley- writer

You and Me and Them

Nostalgia is a Microrganism
↑Back to Top

Insert copy here, which should vary depending on your region. Accept